Have you got a winter-feeling yet? If not, visit a Lucia-concert. Today we celebrate Lucia in Sweden, getting up early to dress for success in white dresses, putting glitter in our hair, and candels in our hands, and then we sing Christmas carols, for hours and hours.

I have been singing Lucia-songs since I was little. First for mum and dad, later for the entire school, with the school choir. In college I was chosen to join the master choir. We were practicing Lucia-songs för several hours every day with a vocal coach a whole semester.  On the Lucia-day we were performing for the elderly, sick and homeless. It was nice to be able to do something good.

Althougt I was a little bit sad I never was elected to be Lucia. I was bridesmaid year after year, standing in the shadows while all the limelight was landing on the Lucia. Later though then the Lucia was fainting due to the press and the heat, and got stearine all over her hair, and had to cut it short, I was praising the Lord that I never had became Lucia. Yes, I was vain back then and my hair was too precious to me.

But I also valued my peace of mind. To stand just behind the person in the center has been my role in life all since then, and it is a comfortable place, especially if you are sensitive to stress.

Later on it was my turn to be the audience when my sons were performing as star boys. I have never seen anyting as cute neither sooner or later. But I realise that is typical for a parent. All parents have special ears, don´t hear if their kids are singing false or looks silly in their hats. Just crying and think it is magical.

Don´t laugh, your will soon be there yourself, if you don´t have children allready.

If your don´t have the opportunity to watch a Lucia-procession, try at least the typical Lucia-fika, saffron buns and glögg.

That is magical. I promise. 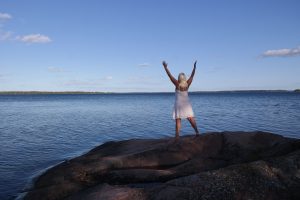